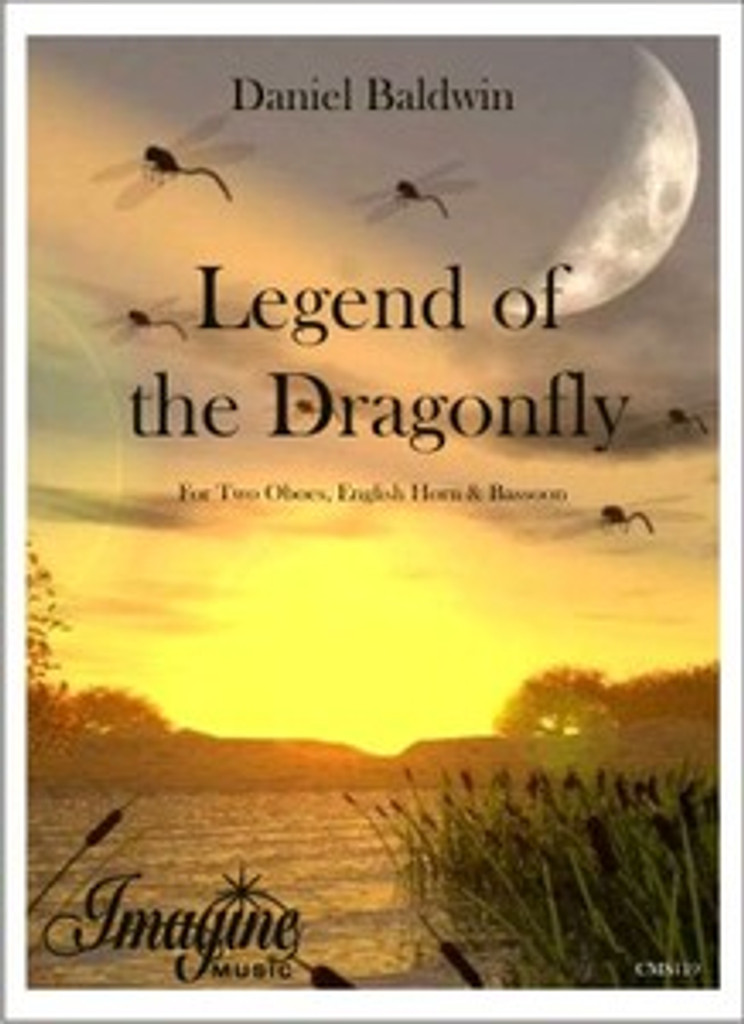 For Two Oboes, English Horn, and Bassoon
By Daniel Baldwin

Composer's Notes
Legend of the Dragonfly is the first of a multi-piece commission from legendary oboist John Dee.  I approached John in 2010 about the possibility of him spearheading a consortium project.  I had been contacted by several oboist friends suggesting this.  He and I hit it off right away and I'm very pleased to call him my new friend.  He is a visionary supporter of new music and our project calls for several pieces with non-standard double reed instrumentation.  In the midst of trying to write this piece (and many others), in the 2010-2011 school year, I had tragedy after tragedy occur in my personal life.  John stuck by me like a true friend and offered encouragement and support as I completed the piece just a matter of days before its intended premiere.  When tragedy strikes you find out who your real friends are.  I thanks John and my many friends for helping me to pull through a tough time in my life and still be on board with a short notice premiere.

Dragonfly's are among the oldest creatures inhabiting the earth.  Their are many different species that exist in numerous parts of the world. each has beautiful colors, dramatic histories, and colorful legends.  With this in mind, I sat out to write a beautiful and expansive work for this unique double reed quartet.

In the first movement, Goddess' Horse, I imagine a large white stallion being ridden by a beautiful goddess. The beginning opens with this scene and many adventures ensue.

In the second movement, Waterwitch, I envisioned a darker character, almost a villain, lurking in the shadows.  Even though this witch is surrounded by darkness, moments of light approach and go away, eventually fading back into the shadows.

The third  movement, Blind Stinger, is based on the legend that says if you get to close to this beautiful creature, it will attack and poke your eyes out.  Beautiful melodic material is often interrupted in this movement by vicious attacks from the dragonfly and, though it is aggressive, we manage to survive.

The fourth movement, Damselfly, is a lush and gorgeous pastoral scene with silky melodies and resonant harmonies.  A brief moment of tension interrupts, but quickly returns to the pastoral scene.

In the finale, Devil's Needle, I took a slightly different approach.  The dragonfly throughout this piece has been portrayed as violent, but this is usually not the case.  Dragonflies are as lovely and docile as they are important to our ecosystem.  Moments of darkness fade in and out of this movement, but the general effect is one of continuous movement, rhythmic interest, and beautiful lyricism.

Legend of the Dragonfly was commissioned by and gratefully dedicated to a consortium of oboe and bassoonists, with generous assistance from Richard Ramey, and led by my friend John Dee.  John premiered this piece at the 40th International Double Reed Convention at Arizona State University on June 1, 2011 along with Michele Fiala, Rogene Russell, and Matthew Morris.