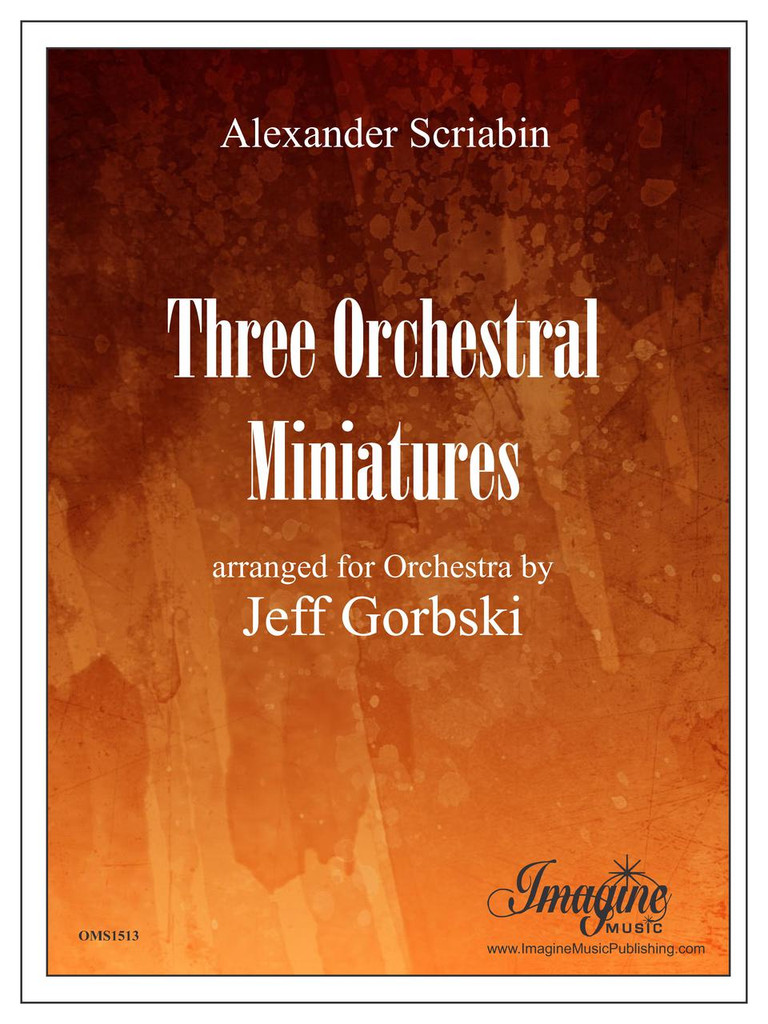 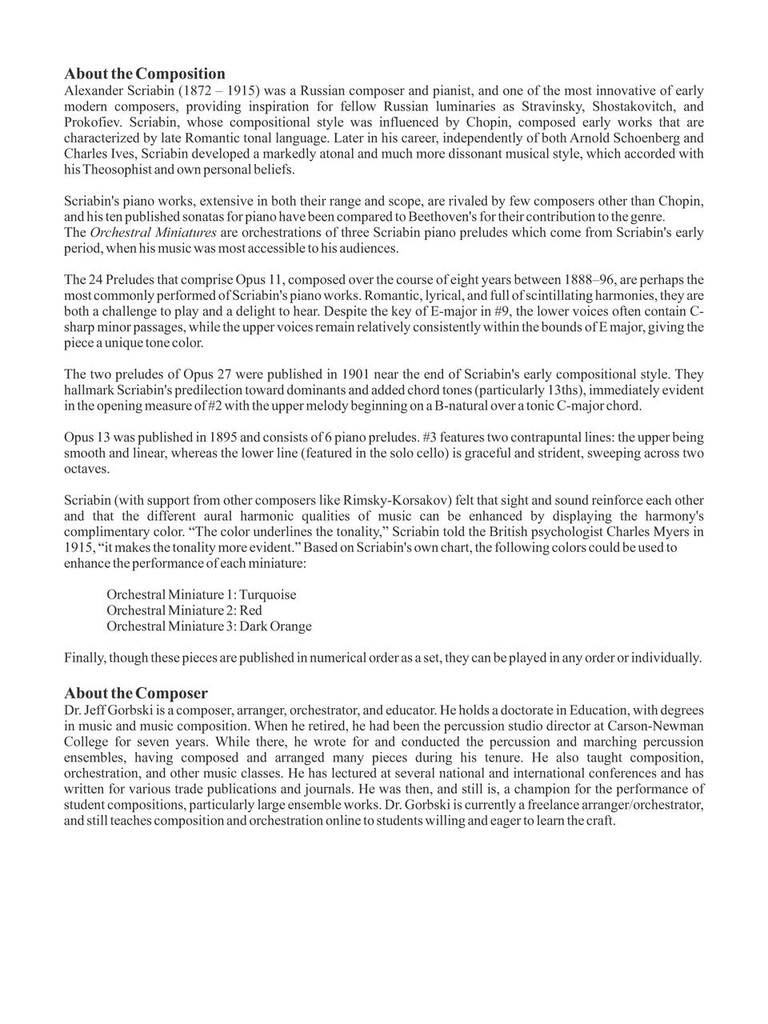 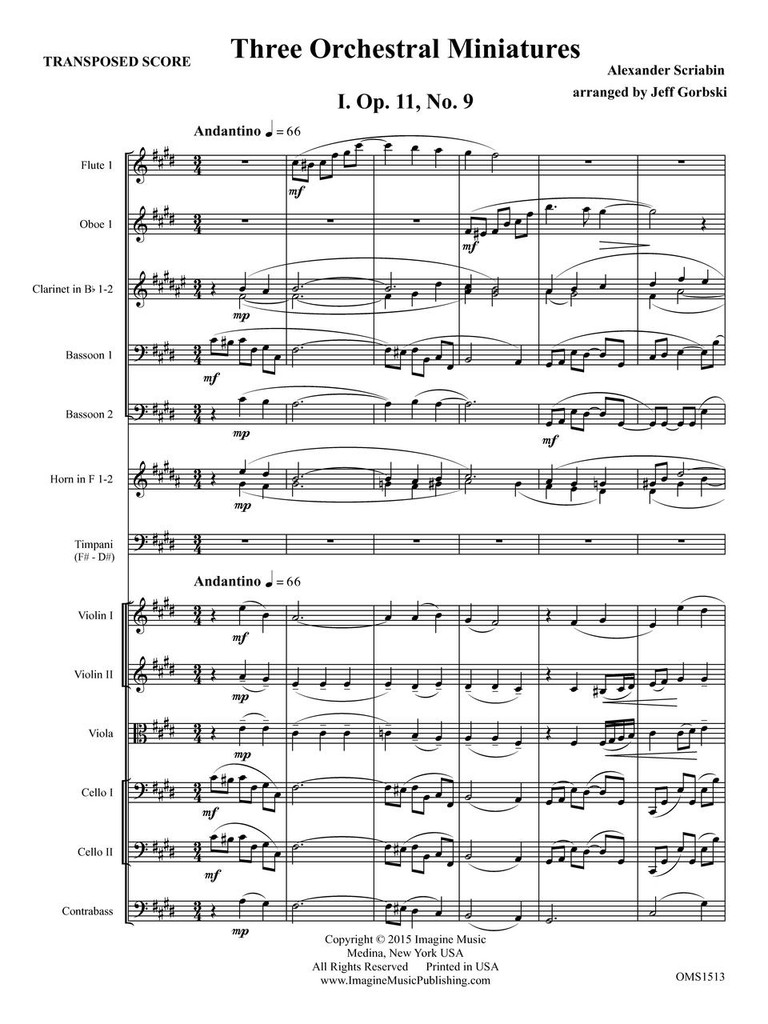 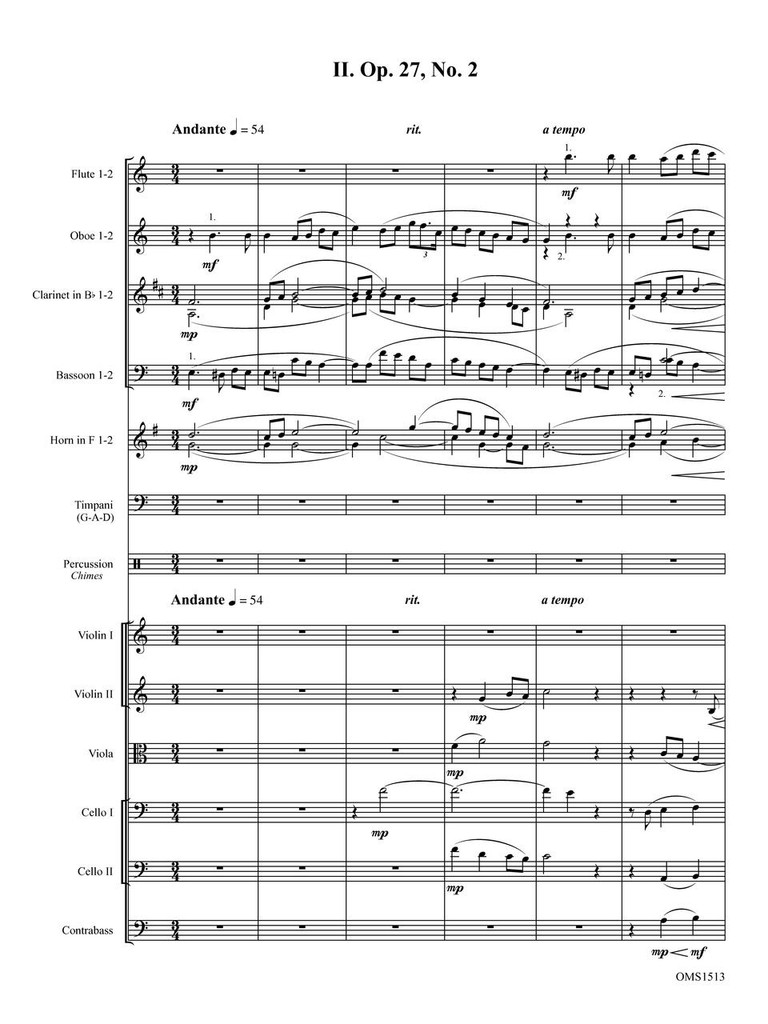 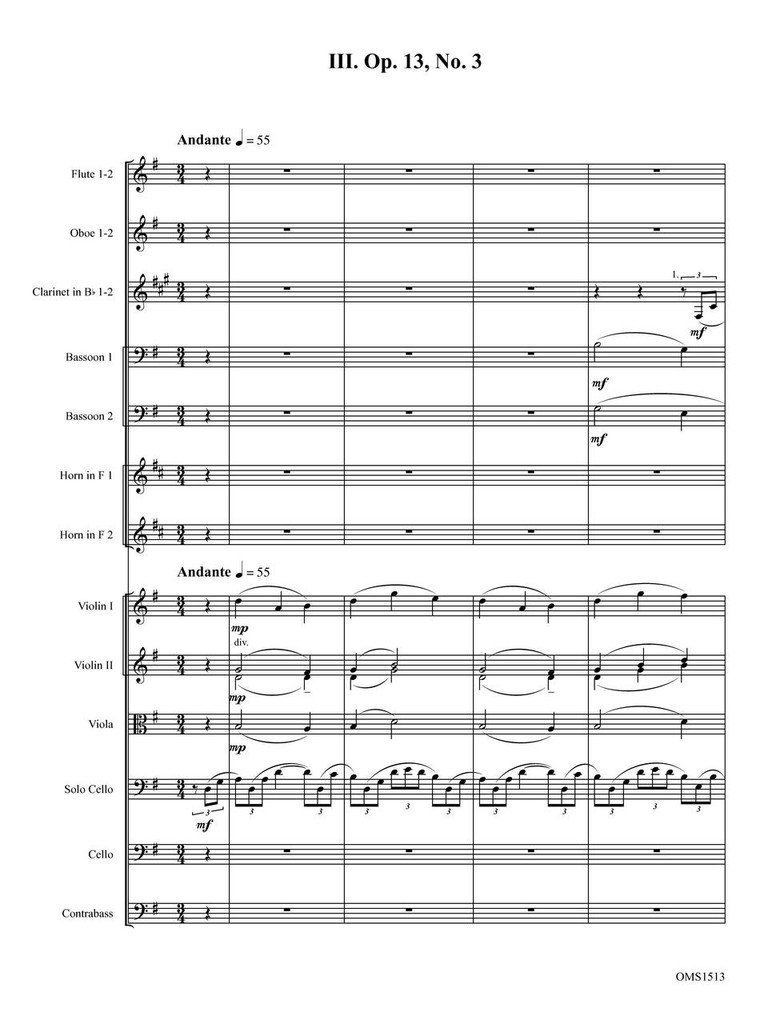 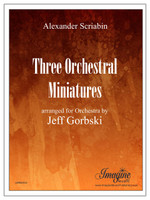 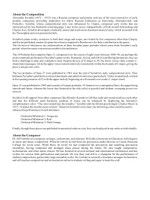 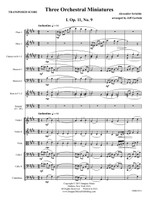 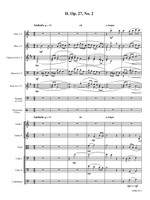 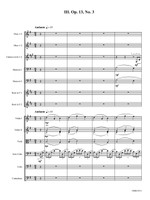 For Orchestra
Arranged by Alexander Scriabin

Alexander Scriabin (1872 – 1915) was a Russian composer and pianist, and one of the most innovative of early modern composers, providing inspiration for fellow Russian luminaries as Stravinsky, Shostakovitch, and Prokofiev. Scriabin, whose compositional style was influenced by Chopin, composed early works that are characterized by late Romantic tonal language. Later in his career, independently of both Arnold Schoenberg and Charles Ives, Scriabin developed a markedly atonal and much more dissonant musical style, which accorded with his Theosophist and own personal beliefs.

Scriabin's piano works, extensive in both their range and scope, are rivaled by few composers other than Chopin, and his ten published sonatas for piano have been compared to Beethoven's for their contribution to the genre. The Orchestral Miniatures are orchestrations of three Scriabin piano preludes which come from Scriabin's early period, when his music was most accessible to his audiences.

The 24 Preludes that comprise Opus 11, composed over the course of eight years between 1888–96, are perhaps the most commonly performed of Scriabin's piano works. Romantic, lyrical, and full of scintillating harmonies, they are both a challenge to play and a delight to hear. Despite the key of E-major in #9, the lower voices often contain Csharp minor passages, while the upper voices remain relatively consistently within the bounds of E major, giving the piece a unique tone color.

The two preludes of Opus 27 were published in 1901 near the end of Scriabin's early compositional style. They hallmark Scriabin's predilection toward dominants and added chord tones (particularly 13ths), immediately evident in the opening measure of #2 with the upper melody beginning on a B-natural over a tonic C-major chord. Opus 13 was published in 1895 and consists of 6 piano preludes. #3 features two contrapuntal lines: the upper being smooth and linear, whereas the lower line (featured in the solo cello) is graceful and strident, sweeping across two octaves.

Scriabin (with support from other composers like Rimsky-Korsakov) felt that sight and sound reinforce each other and that the different aural harmonic qualities of music can be enhanced by displaying the harmony's complimentary color. “The color underlines the tonality,” Scriabin told the British psychologist Charles Myers in 1915, “it makes the tonality more evident.” Based on Scriabin's own chart, the following colors could be used to enhance the performance of each miniature:

Finally, though these pieces are published in numerical order as a set, they can be played in any order or individually.