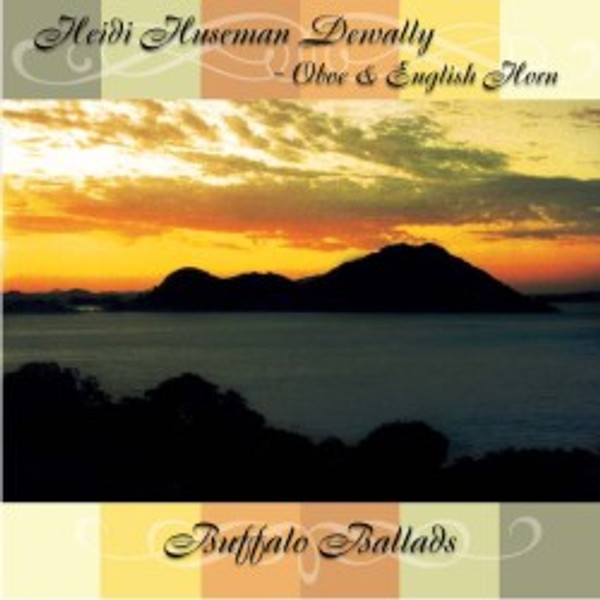 Theme:
United States-composed pieces with a western flair celebrating Heidi Huseman Dewally's roots (from Oklahoma).  Many of the pieces are inspired by songs and dances and are lyrical in nature.

Theme:
United States-composed pieces with a western flair celebrating Heidi Huseman Dewally's roots (from Oklahoma).  Many of the pieces are inspired by songs and dances and are lyrical in nature.

Western Serenade for Oboe, Clarinet, and Piano
by Daniel Baldwin

Reminiscence for English Horn and Piano
by Andrea Clearfield

Song of Praise
by Daniel Baldwin

Gaia for Soprano, Oboe (or Flute), and Piano
by Andrea Clearfield

Songs for Oboe and Piano
by William Grant Still/arr. Alexa Still
I.Bayou Home
II.If You Should Go
III. Song for the Lonely

Sonata for Oboe and Piano
by Daniel Baldwin
I. Prairie Song
II. Trail of Tears
III.Spirit of the Heartland Heidi C. Huseman Dewally was born a “Hoosier” (born in Indianapolis, Indiana); however, she was raised a “Sooner” in Norman, Oklahoma. She has fond memories of her childhood home, especially since she met her husband, Michaël Dewally at the University of Oklahoma. Mrs. Huseman Dewally earned a bachelor of musical arts, oboe performance and a master in business administration from the University of Oklahoma.

In October 2003, Mrs. Huseman Dewally was selected to perform in the Civic Music Association of Milwaukee’s Young Artist recital series. Mrs. Huseman Dewally won the Betty Lou Scandling Hubin Scholarship for World Music/Multicultural Music from the Mu Phi Epsilon Foundation. The award funded a recital series entitled MOSAICS, with performances in September 2008 and January 2009. The recitals featured music, dance, and song from countries of all continents as well as a media presentation of the corresponding countries. Mrs. Huseman Dewally enjoyed reaching out to the community and celebrating diverse cultures and she plans to pursue similar projects developed for school-aged children.

The “Buffalo Ballads” title was inspired first and foremost by the music selection of American composers celebrating our country’s folk songs and spirituals tradition. The buffalo is a perfect symbol of the resilience of the American Spirit and a highly romantic figure. The CD by a happy accident was also recorded in Buffalo, New York. Please e-mail Heidi and her husband, Michaël, at frenchlovr@ameritech.net, if you would like to know more information regarding Heidi’s live performances.

...and they were fierce

4 miniature per 4 strumenti a fiato